Where do I begin… An event with more than 50 thousand attendees from more than 160 countries! The Web Summit has finished, but memories stayed wandering around. As a person who has organized different kind of events participated on numerous as well, my experience with Web Summit was dramatically different and changed my perceptions forever! Below I’ll try to summarize the four days, share my experience and thoughts and give you as much valuable info as I can. First, let me introduce you to Web Summit 2016. 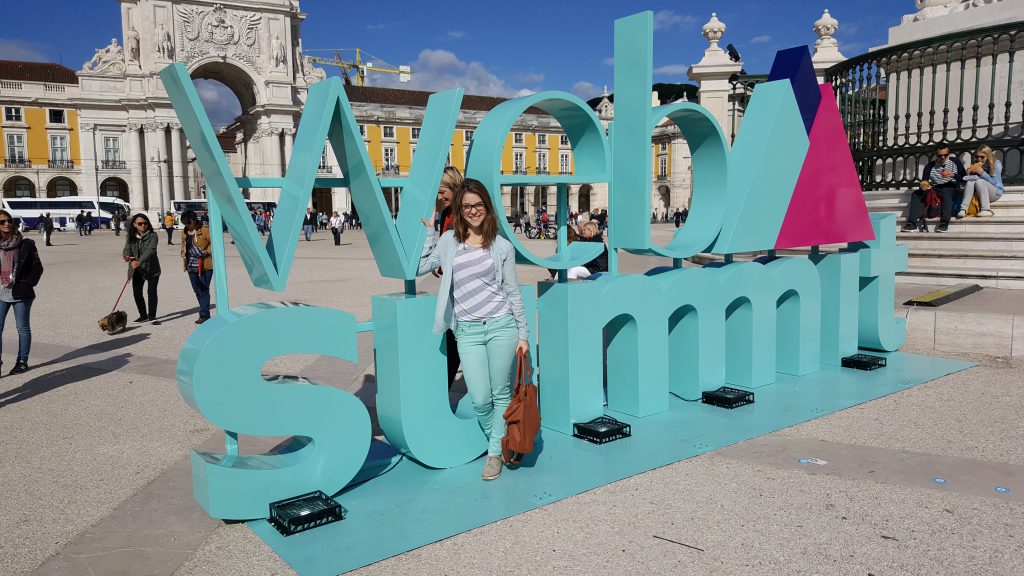 What is Web Summit?

Considered as the best technology conference on the planet, Web Summit has grown from 400 attendees to over 50,000 attendees in only 6 years. The event used to take place in Dublin, but this year Web Summit was held in the capital of Portugal, Lisbon. Over a four-day span from 7th to 10th of November, you could attend 21 independent conferences hosted under one roof. Each of these 21 conferences had its own stage, schedule, exhibition area, workshops, networking evening events and more. 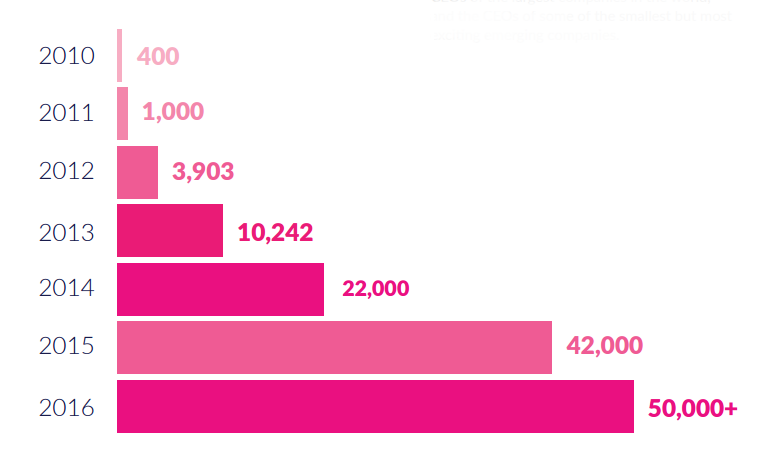 Keeping in mind that there were 24 different stages, you had to make a good plan (thanks for the Web Summit app devs) what you want to see and who you want to meet. Mainly, I spent the event switching between Centre Stage, PandaConf, CreaTIFF, Content Makers and Startup University, each hosting amazing speakers from top-notch companies. You couldn’t switch through the stages without noticing the amazing stands of startups and companies, that have created a small tech world with all latest inventions, gadgets, AR and VR devices.

Companies and Startups at Web Summit

The opening ceremony took place on Monday evening. Paddy Cosgrave (Web Summit CEO) gave the opening remarks and we were welcomed by António Costa, the Prime Minister of Portugal with the words “I want you to remember Portugal as a dynamic, progressive and open to business country.”. And that’s exactly what we did. It is truly impressive how political leaders are supporting the business and startup scene and transforming Lisbon into rapidly growing and enthusiastic tech scene. 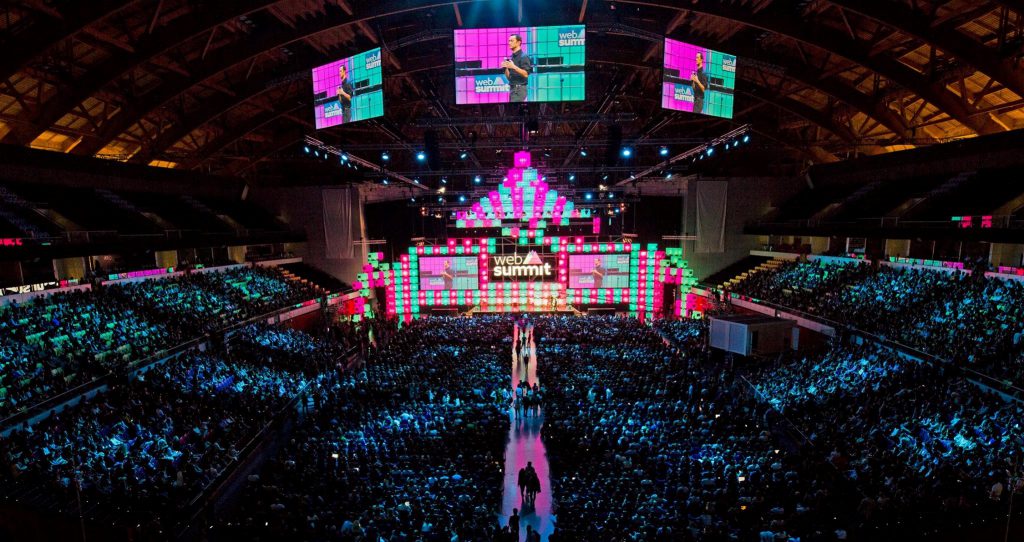 It’s not possible not to mention the speech of Joseph Gordon-Levitt, Founder of hitRECord, answering “Does business stifle creativity?”. He is an incredible actor, but also an entrepreneur. In his talk he shared the vision about hitRECord and emphasized the importance of fostering creative collaboration between people on the internet. He was very optimistic how technology can affect democracy and that the next generations won’t only socialize, BUT they are going to make things together. You just have to check out his presentation, as well as some of the others mentioned above.

“With time technology will move us further.“ – Joseph Gordon-Levitt

The highlight of the day for the majority of attendees was having two football legends — Luis Figo & Ronaldinho on Centre Stage, sharing their startup experience. Personally, the highlight of my day was meeting Mike Butcher from TechCrunch, a very respected and influential person in the tech world. Yay! 🎉

Day two, or the day after US elections. From the first notification, I simply knew it will be all about that. On the Centre Stage, we even had a panel discussion about what will the new President of the United States mean for the tech landscape throughout the world. Moreover, the most remarkable eruption of emotions could be seen on stage by Dave McClure (Founder, 500 Startups). 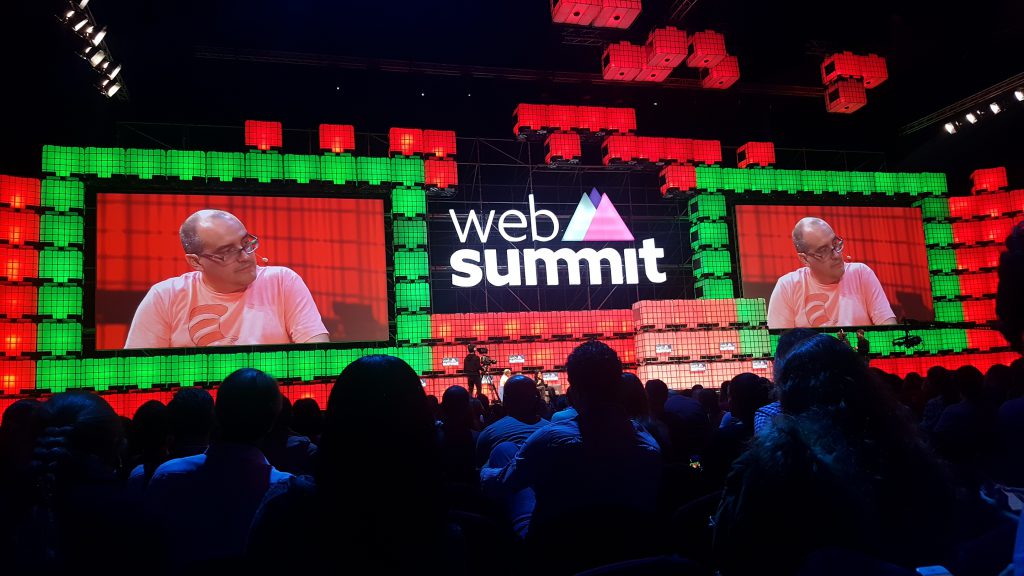 Is ego the biggest reason for failure? — Dave McClure, 500 Startups

Aside from the (what some would call shocking) US elections, I enjoyed the discussion between Alexis Ohanian (Co-Founder, Reddit) and Ryan Hoover (Founder, ProductHunt) about the power and limitations of aggregated approval (a.k.a. Upvote ⬆️). After that discussion, I practically followed Alexis everywhere, first on PandaConf (he was talking about how hard is for brands nowadays to earn attention and the importance of authenticity, that word of mouth has always been the king) and his last presentation on Startup University, AMA session about his secret to success. 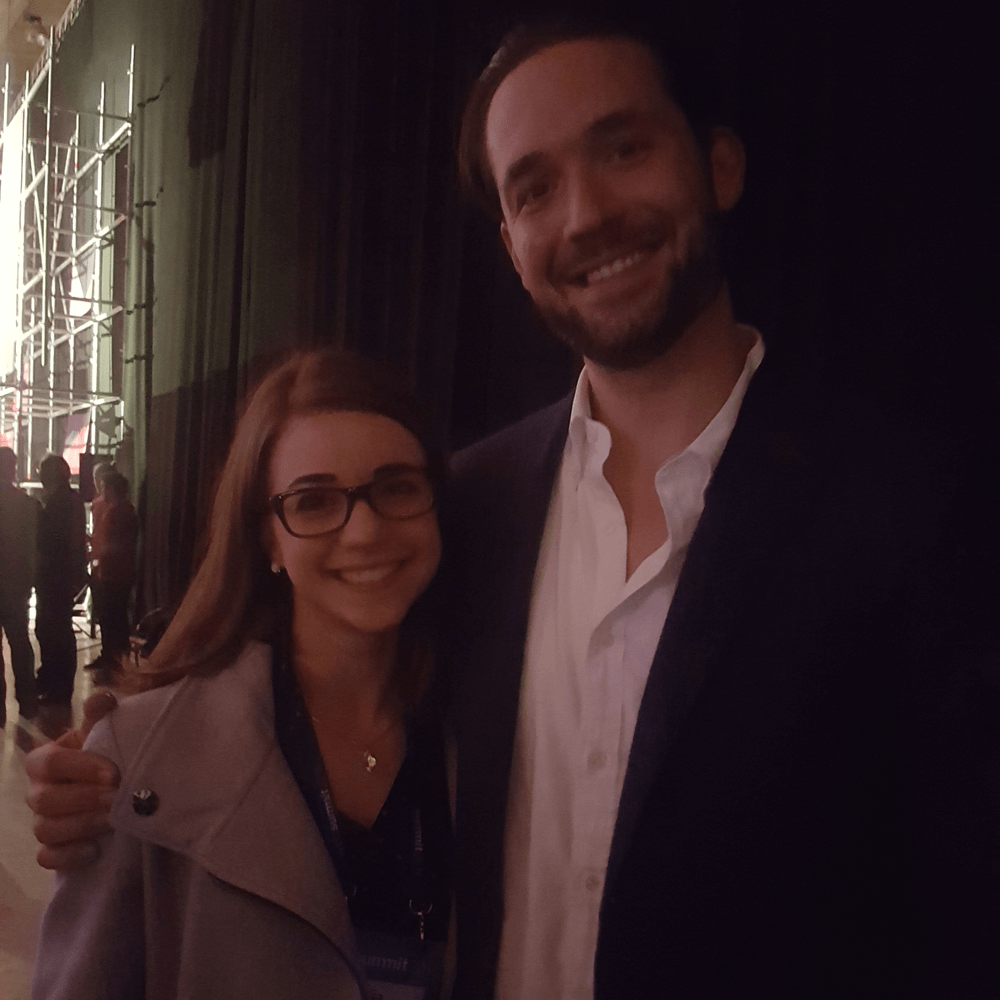 Unfortunately, the last day, known as “visit as many stages, presentations, and stands as you can”. It was pretty impossible to catch em all, but I did my best 🙂

The one presenter that I was mostly looking forward to was Gary Vaynerchuk (Founder of VaynerMedia), with the most energetic presentation we observed – “Afraid to fail because of other people’s opinions?“. If you watch his videos regularly, you won’t find any new information on this talk but it was incredible how passionately he appealed to the audience to be authentic. I didn’t get to meet him personally, but it was amazing after hundreds of pictures and videos watched, to see him live and feel his energy and enthusiasm. You can see from my face below how happy am I while streaming his presentation live on Facebook. 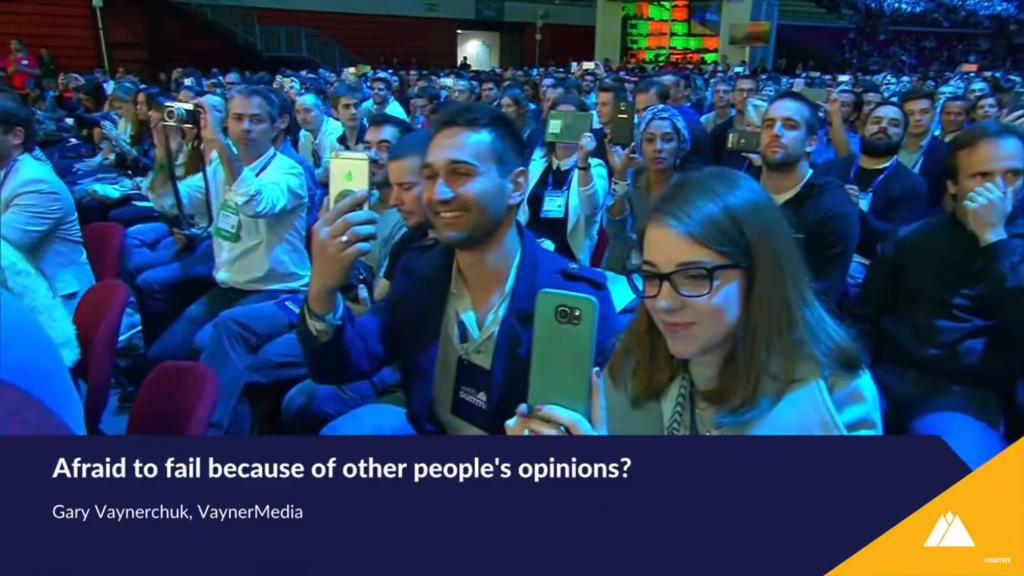 Afraid to fail because of other people’s opinions? — Gary Vaynerchuk, VaynerMedia

Later on, on PandaConf, Mike Quigley (CMO, Niantic) and Patrick Bousquet-Chavanne (Executive Director, Marks & Spencer) shared with us the challenges that being a Global CMO of one of the world’s leading companies brings. As a Pokémon Go fan, I was interested in the challenges Mike Quigley is facing, so I made a little interview with him. His ultimate advice for success was that “You have to do what you are passionate about.“.

In the closing presentation “The age of moonshots and Hyperloop One“, Josh Giegel (Co-Founder, Hyperloop One) and Shervin Pishevar (Co-Founder, Sherpa Capital) announced to build the word’s first hyperloop between Dubai and Abu Dhabi and also unveiled Hyperloop One System. “If you view transportation at the next broadband, and you can move people and things much faster, then you begin to push the boundaries,” said Pishevar.

The charming Lisbon was fully prepared for the event. Aside from the stages and the talks, Web Summit was not only presentations and stands, the evenings were reserved to experience the best of Lisbon’s nightlife. Night Summit took over the streets and bars of Lisbon. Barrio Alto, Pink Street, and Cais do Sodré those 4 days were full of geeks. That was the real time to meet people, discuss ideas and connect.

What a wonderful city. It's Lisbon & Night Summit 🙌 #WebSummit pic.twitter.com/MNlqgxPDr5

Near the arenas where Web Summit was happening, was the insufficiently exposed Sunset Summit, where we could try the very best of Portuguese food, wine, and culture. I’ll let the pictures do the talking.

I have to mention the initiative of Women in Tech to encourage women to attend Web Summit. In a world with noticeable fragmentation and segregation, it was surprisingly for me to see so many women at a tech conference (42%), that share the same interest in technology.

Attending any conference is all about the connections you make, not the business cards you give. Web Summit was a place where I had lots of interesting conversations, that might not change my career, but will for sure change who I am and pushed me to see further than before. I would recommend anyone to go there, feel the energy, bring your experience to the next level and see what other people around the globe are doing. The inspiration and motivation gained from Web Summit make this conference a must-see.

Of course there were some downsides as expected for that number of attendees: the infinite waiting lines for everything (the registration on the first day, getting food, restrooms, everything!); the wi-fi worked but not robustly all the time; overlapping presentations that you want to attend; 20–40 minutes of talks were not enough to cover a topic in detail; and never enough plugs to recharge your battery 😀 Besides that, it’s important to try and get some sleep during the 4 days there!

If you want to see some of the talks that were not added above, check out the full schedule of the event. Below are videos of different stages: